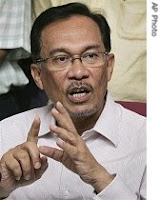 Anwar said Wednesday that coalition lawmakers from Malaysia's eastern states of Sabah and Sarawak had contacted him about switching sides, a move that could help shift the power balance and unseat the government.

Anwar's three-party opposition coalition won more than a third of parliamentary seats and four states during the March 8 election.

His new 69-member Cabinet was sworn in Wednesday, nearly two weeks after the ruling coalition suffered major losses in the elections.

On Tuesday, the prime minister slashed the 90-member Cabinet in a bid to rejuvenate his administration.

Among those dropped was Home Minister Radzi Sheikh Ahmad. Radzi Wednesday resigned his posts as secretary-general of the National Front and head of the United Malays National Organization. The UMNO is the major party in the ruling coalition.

Email ThisBlogThis!Share to TwitterShare to FacebookShare to Pinterest
Labels: Anwar, Elections 2008, From the Press, Resident.WangsaMaju