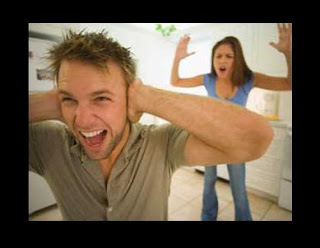 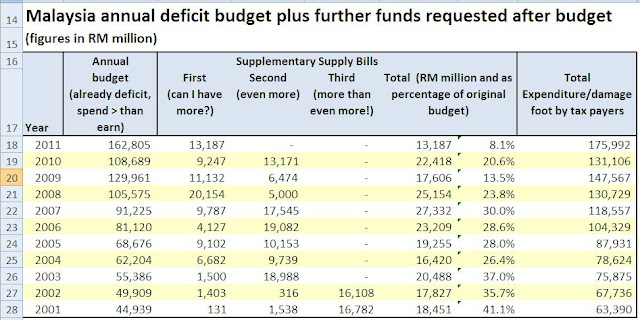 In other ways, just 1) draw up a bigger budget than last year, 2) over spend it and 3) ask for more money to burn since the dumb rakyat are going to pay for it and vote Barisan Nasional back anyway. Do remember than in June 2011, an additional RM13 billion is being request but barely 2 months later, Malaysian tax payers are going to be hit by another 4 financial blows costing maybe RM10 billion, at least apparent to this fuming tax payers.

Come to think of it, when our paid government officers have failed to prevent millions of illegal immigrants infiltrating our country, resulting in squalid environment, suppressed wage levels, taking away employment opportunities of genuine citizens, criminal activities and outflow of funds from our country, the under-performing administration will get between RM3.65 to RM7.78 billion sucked out from employers who flaunt immigration and employment laws.

Businesses being businesses; they will take this additional operating expenses, add a mark-up of 10%, 50%, 80% or whatever they like and push up cost of living even higher.

The operating expenses would include down time arising from the inordinately long hours spent on getting the illegals to Putrajaya to queue and be processed.

This is a golden era for illegal immigrants and probably would encourage them to immediately swim into Malaysia and walk straight to Putrajaya. Perhaps the E.C. office round the corner for some sight seeing too?

Instead of focusing on eradicating and evicting illegal workers, the Rakyat Diutamakan administration is focusing on diluting the interest of genuine Malaysians.


2) Half month bonus to civil servants

Working in private sector, bonus is something that one has to work, fight, hope and pray for. Many a time, one might feel a sense of helplessness. “I did so much work and the boss say the economy is bad so no bonus!!!???”; “even after I pointed out so much in my performance appraisal report, the bonus I got is not near what I deserve.” Such is life outside the cushy air conditioned offices of iron rice bowls holders.

However following
* the chaotic and infuriating 6P registration process,
* the scathing attack by Teoh Beng Hock RCI on MACC’s modus operandi,
* mass arrest of custom officers on charges of corruption,
* creative use of ISA to punish corrupt immigrant officers,
* bombardment of Tung Shin Hospital,
*the registration of “Kampung Baru” and thousands other as a voter, 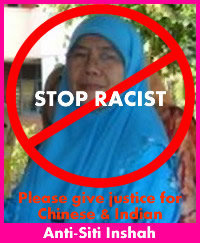 She can’t be reprimanded, only rewarded.

Running military operations requires great care for human lives and huge sum of tax payers’ money are involved. So when the Defense Minster vaguely stated that they have forgotten to include certain items in the budget, which surely must be vital since a huge sum of RM493milion is involved, I do wonder if this is a case of gross in planning of logistics, or just plain ugly mark-up of existing allocation.

If the former, the lives of those expensively trained and probably loved officers and men are at risk. If it is the case of the latter, then the Finance Minister should impose financial discipline lacking so glaringly in successive Barisan Nasional administrations that such weakness have developed into entrenched and stoutly defended tradition.

The key issue here is not whether the duit raya is paid or not. The key issue is where did the money come from.


Felda is a rich and powerful, well runned organization for a long time until it was revealed that its cash reserve depleted significantly, as a result from diverting funds to non-core related activity like acquiring fancy buildings miles and miles away from the settlers.

If runned sensibly, Felda reserves should be more than adequate to enable the settlers to be financially independent, modernize their production methods, increase their yield, assist in replanting and perhaps expanding the variety of their corps hence reducing Malaysia’s dependency on food imports and shield the country from adverse effect arising from food speculation, or more accurately, “to hell with the world and let’s gamble with food prices”.

If Felda settlers emerged as modern farmers with high yield, not only Malaysians can enjoy lower food prices, our farmers can perhaps be elevated to exporters earning foreign currency, strengthen the ringgit, making imports and overseas vacation more affordable.

At the moment, this gesture of duit raya has given me the impression that Felda settlers have been reduced to beggars in a feudal society sitting on valuable but under-utilised land. Their full potentially sadly depressed.

In the meantime, just continue paying your taxes people. You have voted yourself into this one.