How to create your own 'Recent Comments' widget

This posting is about how to create your own simple 'Recent Comments' widget without having code that points to another site. Unlike many sites offering this widget, this code below here will not point to another third party website which may slow down your webpage load:

Wangsa Maju resident Belinda Bateman, 40, succumbed to her illness last Friday, 13th Feb 2009 after a long-two-year battle with breast cancer. The Sun covers Belinda's struggle with her illness here. The Sun server is down when I am doing this blog posting, so I've decided to copy past The Sun dated (5th Feb) page here:
Please click for bigger view. 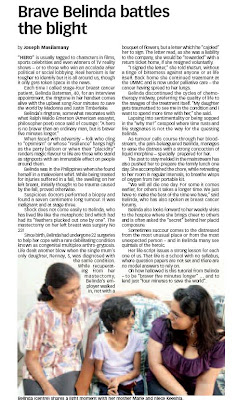 Belinda, a single mother, was born with congenital arthogryposis multiplex which results in multiple joint contractures leading to deformities.  Read the run-around given by EPF and SOCSO here.

Source: Treasury and BNM
Please click on image to enlarge

No point having long blog postings on the Perak coup because it doesn't need rocket science to read what's in the playing cards of Najib and the Perak monarchy, and what cards which have been laid out. Who cares what's being spinned out by the pro-UMNO bloggers- the outcome is simple- The Perak Sultan had betrayed the trust of his people, put a dent in democracy, and set a precedent roadmap to future BN takeover of Pakatan Rakyat states. Daulat Tuanku? You've got to be kidding me. 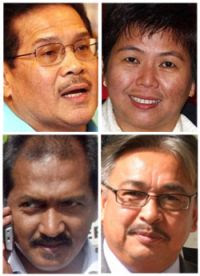 Above: The famous four millionairre politicians
Picture courtesy of IamMalaysian

Above: Sultan Azlan Shah. Together with BN, the monarchy has pulled off
the greatest political coup in the history of Malaysian politics.


Malaysian politics is a lucrative business because of the mass of wealth acquired by UMNO- on a party level and on a personal level by its Minister-members. It you can't beat them, buy them. Elected MPs earn probably about RM11K per month as basic and a couple of thousand per month as allowances. Non-BN parties are poorer because BN being a cash cow offers more side incentives for their elected members compared to Pakatan Rakyat members. Non-BN MPs are opened to multi-million offers equivalent  to or more to English soccer players; it takes a lot to resist this temptation. The enticing millions of ringgit offered by Barisan Nasional to jump party is a sure ticket to good retirement for any politician. That's why in Malaysian politics, if you really want to become a people's MP you 'll have to amass a comfortable amount of money, be very focused on your integrity and be very aware of your surroundings.


To sum it all, BN and the Sultan has no right to declare Perak a BN state and the Perak people deserve a state election. The judiciary and monarchy's gone to the dogs and Sultan Azlan Shah's decision-making process is just a good example of that.
By resident.wangsamaju at 2/07/2009 09:00:00 PM 2 comments: 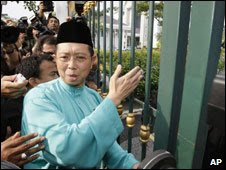 A Malaysian opposition leader has been forcibly removed by police from his office in a political tussle over which party controls the state's legislature.

But the ruling National Front coalition said it was wresting control of Perak state legislature after the defection of several opposition lawmakers.

Mr Najib is expected to become prime minister next month in a transition agreed with incumbent Abdullah Badawi.

Commentators have described the Perak manoeuvres as a burnishing of Mr Najib's image as a decisive and politically adept leader before next month's internal party vote.

He had recently run two by-election campaigns in which the National Front coalition lost.

The National Front claimed it had wrested control of Perak's legislature after three lawmakers quit the opposition on Wednesday.

Following the defections, both sides have 28 seats in Perak's 59-member legislature, but the National Front claims it effectively has control because the three independents would back it in any vote.

Such a takeover is really a big blow to democracy and insults the wisdom of the masses
Opposition leader Anwar Ibrahim. The takeover was endorsed by Sultan Azlan Shah, the influential hereditary ruler of the state.

Chief minister Nizar Jamaluddin insisted he had the popular mandate and refused to leave office, but when he arrived at work on Friday, he found all his personal belongings had been removed.

Police escorted him out of the building less than an hour later.

More than 2,000 opposition supporters had gathered late on Thursday at his home in a show of support, shouting "Reform" and "Long live the people"

"Such a takeover is really a big blow to democracy and insults the wisdom of the masses," opposition leader Anwar Ibrahim told the Associated Press news agency.

Opposition leaders have criticised the conduct in the Perak change of power, saying the use of defections instead of an open by-election has damaged democracy.

He later tried to take over the government by engineering defections but failed to gain adequate numbers.

The same party has controlled Malaysia for more than 50 years but analysts say there is no doubt the government is struggling.
By resident.wangsamaju at 2/07/2009 04:15:00 AM No comments:

One thing I do not understand is why does the Sultan of Perak not following the due process of the law. The Constitution clearly states that the MB cannot be removed just like that unless he resigns or is give a vote of no confidence. There are no other legible methods to remove the MB provided under the Constitution. Or is this interpretation of the law a grey area?
Did Najib make some of kind of arrangement with Sultan Azlan Shah? Or is the Sultan so afraid of Najib? What is a King for if he does not listen to the pleas of his people (the people want re-elections, not some auto-selected government). I'm sure by now the are no less than 4 overnight millionaire politicians in Perak?


BN is capable of bribing anyone. Which makes us taxpayers suckers. After working so hard for the money, this lousy Government burns it away for some state whack-back coup d'etat. Yes, bribery and corruption is nothing new, but when do we, or can we, stop the buck.
By resident.wangsamaju at 2/06/2009 12:57:00 AM No comments:

Of Criminals and Racism

Robbed in Wangsa Maju
Recently a guy was robbed right in front of the Public Bank opposite Jaya Jusco in Wangsa Maju. The thief got away, but the victim recognised him somewhere outside a 7-11 store at another area in Wangsa Maju sometime later. The suspect was with an accomplice on a motorbike. A chase ensued and ended with the victim knocking down the suspects' motorbike with his car. The two suspects fled on foot but one was cornered by residents as he ran deeper in the housing area. The suspect was being bashed up as residents called up the 999 number. Since the police squad did not arrive after half an hour (the nearest police station is about 10 minutes away) some residents called up a neighbor (who is a police) who in turn called up the police station. A squad car arrived minutes later. The police pressed the bashed-up suspect for information and shortly a few other suspects were taken into custody.
By the way did anyone realise that it is a police tactic to delay response time by 30-40 minutes when a suspect is caught by members of the public, so as to allow the public to hentam the suspect a bit.
Highway car hijack
An associate of mine lost his just-bought Camry a year ago on the NKVE. The couple were on the way back from work when another Camry bumped into them from behind. As this couple alighted from their vehicle to 'settle' the matter, 4 guys emerged from the other Camry and apprehended the couple. The guy was slashed, while his wife was shuffled into their car by the two other fellows. The two cars drove off, leaving the guy victim by the road-side. For the wife, there is little guessing on the outcome. OK, the rape did not happened because she opened her car door and bailed herself out right in the middle of the highway. Both husband and wife was hospitalized for sometime, absent from work due to medical leave. Their car is not found till today.
No need to look far- even in Wangsa Maju there are numerous car hijacks and car thefts.
Crime and Malaysians
Noticed that I have omitted the race of the victims and the 'suspects'. Why is that so? Because it's a waste of time. Who cares which race committed the crime. The victims are us, any race any time. While there are demos and protests on racial grounds of Kugan the deceased car thief suspect, the fact exists there are brutal car thefts and there is that police brutality which guarantees a good bash-up on any suspect. The PDRM is stupid. The Minister of Internal Security is stupider- speaking harshly and arresting public protesters; 'investigating' the MPs who showed up at the mortuary at the request of the deceased's family will only deepen public sentiment of hatred towards the PDRM and the BN administration. And of late, conspiracy theories have cropped up on 'why' Kugan was 'murdered'. Can't blame the bloggers because they are sharp and think on the fly. If I've had my way I would not give the PDRM force another cent of increment. Who cares whether many of them are living below the poverty line. The police, as a collective whole, are failing in their jobs to protect the public.
Meanwhile the crimes are still happening and at most times the public is compelled to take the law into their own hands to protect themselves. 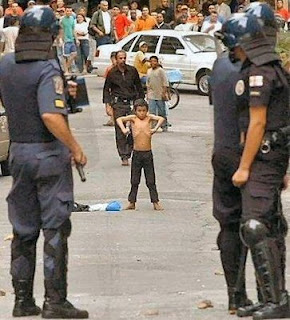