Racism and its impact on Malaysia 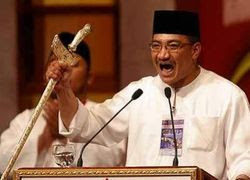 It's right to say Ketuanan Rakyat in lieu of Ketuanan Melayu. I'm referring to Anwar's very recent speech at Kampung Baru on the eve of the expiry of his ban from Malaysian politics. The term Ketuanan Melayu is deeply entrenched in racism- a slogan concocted by Umno politicians to acquire buy-in from the Malay masses. Ketuanan Melayu depicts the scenario whereby the Malay race is 'boss' to other ethnic groups in Malaysia, albeit reluctance acceptance from other non-Malay ethnic groups but due to the social contract set out in Section 153 of the Federal Constitution of Malaysia. This of course, has helped Barisan Nasional win elections (national and party elections)… till the year 2008 that is.

The Umno administration has been singing the same tune until the cows came home- though on the surface accepted by all races in Malaysia, the Ketuanan Melayu concept did not get us anywhere but served only to create more brain drain. Malaysia's population is roughly cut up by the following composition- Malay (above 50%), Chinese (above 23%), Indian (above 7%) and Others (20%). I was internet- researching on migration statistics of people moving out of Malaysia when I stumbled upon some astounding facts- there are about 5.3 million ethnic Chinese in Malaysia but this figure is overshadowed by 6.2 million Malaysian Chinese staying out of Malaysia. I could not find statistics on Indian race migration from Malaysia though. Economics-wise, in terms of GDP growth in 2007, Malaysia (5.9%) ranks after China (10.7%), India (9.2%), Vietnam (8.2%), Singapore (7.9%) and Hong Kong (6.8%). The sub-6% growth is still 'okay' by the sleeping PM and Bank Negara standards eventhough we have slipped, overtaken by Vietnam, India and on a few occasions Burma, Thailand and Indonesia. In terms of growth Vietnam was already 6% back in the year 2003.

The Ketuanan Melayu concept is an enclosed apartheid concept- it fails to view nation building in a holistic perspective by shutting off other ethnic groups from full participation. The irked and irritated non-Malays leave Malaysia gradually bringing along their valuable skill sets and ideas to other countries thus draining Malaysia of a very scarce resource- brain power.

Years from now, when the Malay population moves up from 50% to say 95%, there will be very little difference in terms of Bumiputera rights between Ali and his neighbor because the vast majority by then would all have special rights. If everyone has special rights what's so special about it then. If all that is left are tuan (bosses), where are the workers then?

GDP- the total dollar amount of goods and services produced in a country.

GDP growth rate- an important indicator of economic health- the growth rate is the percentage increase or decrease of GDP from the previous measurement cycle.
By resident.wangsamaju at 4/16/2008 10:41:00 AM