The Minister of Health has finally come out to clarify the 10% of 1Care. It would have been better for the public had the minister attended the 1Care Health Forum held on 12th February at Global Business Park, No 8, Jalan 19/1 Petaling Jaya, when MOH officials did not turn up but 3 other speakers did. Those who attended the 12th February forum were given great insight by Dr Ng Sween Choon, Dr Jayabalan and Dr Xavier.

"The 10 percent (contribution from employees), for example, is being used to scare the people," he told a press conference in Kuala Lumpur today.

Liow explained that the total contribution would be from the government, the employer and the employees, and not a quantum solely to be borne by individual workers as alleged.


4 days earlier, the picture leaked to the public was a complete opposite.

1 Care not yet cast in stone, says Health D-G


The deputy director of the National Health Financing unit, Dr Rozita Halina Hussein, said yesterday 1 Care would have to be made mandatory, but that private healthcare providers would be given a choice on whether to participate in the new healthcare system that has seen stiff opposition from stakeholder groups.


A source however told The Malaysian Insider that the healthcare scheme is at a “very, very advanced” stage of planning and is not as preliminary as the Health Ministry has made it out to be.

# publish the proposals, facts, justifications and explanation for the public to understand?

It is Badawi era flip flopping all over again.

The Minister has stated that it would be a joint contribution thing. As the ratios are not finalised/disclosed/made public, let's look at a couple of hypothetical scenarios, very much subject to the REAL ratios to be decided by the government before or after the GE.

Let's take Mr A as an example. He earns RM4,000 a month basic pay and can look forward to a 1 month bonus at the year end. 1 month bonus is about 8.3% of his basic pay, something the company's accountant budgeted for and approved by the big boss.

Well the company's revenue won't go up in tandem with this sudden 1care money maker so the company accountant (please don't blame him or her) has to do the sensible thing - take the money out from bonus pool. 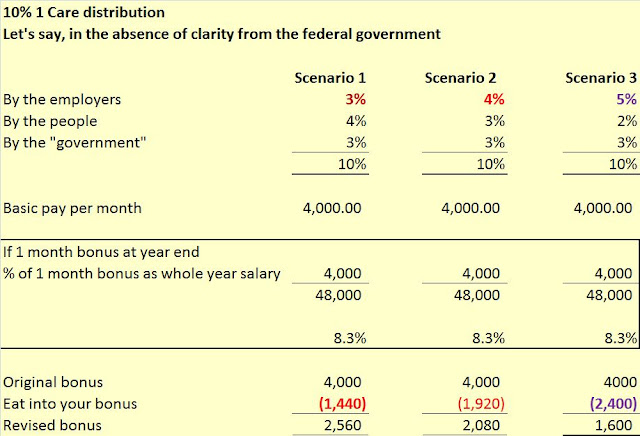 Also, let's look at impact of REAL INCOME of the people since 1Malaysia PM is looking towards high income nation. 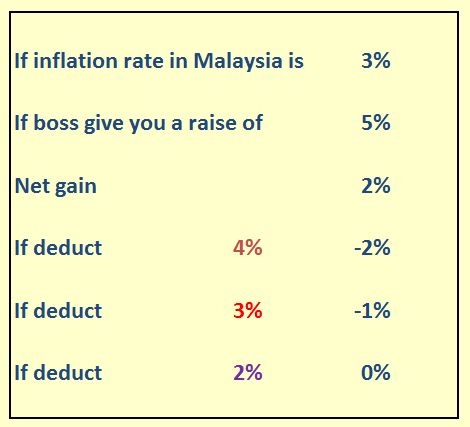 Email ThisBlogThis!Share to TwitterShare to FacebookShare to Pinterest
Labels: Lee Wee Tak, livelihood of yours and mine, tak nak 1Care Malaysia