As an EPF contributor and tax payer, I am most perplexed and worried by this latest pre- general election allocation of our statutory  life savings. 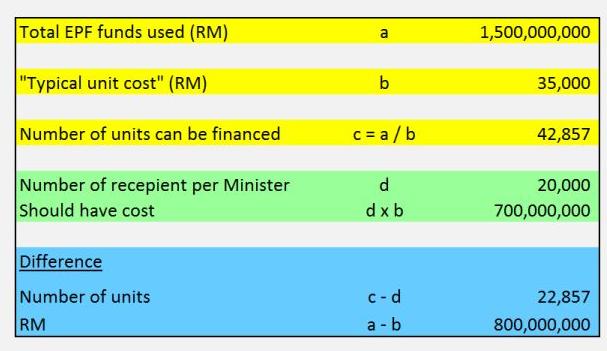 The minister should clarify himself because the numbers do not look right. Unless, of course another minister got misquoted yet again.
Numbers aside, why do the entire nations’ contributors have to fork out for people in Kuala Lumpur only? Why do retirement fund of a Negeri Sembilan, Sarawak and Kelantan contributor have to do with the housing woe of a person in Kuala Lumpur?
We have already paid income taxes, service tax stamp duties, assessments and custom duties. When companies pay taxes, they collect from tax payers via their selling price so how come we tax and EPF contributors have to pay again?

Public Housing programmes should be financed from various taxes collected. It has been like this for so long, why the sudden need to get extra money from EPF?
Port Klang Free Trade Zone scandal was reported to cost tax payers RM12.5billion and that foul up could pay for more than 8 rounds of this seemingly inflated project.
If the Barisan Nasional administration exercise commonsense and discipline with our money, the above mentioned expenditure would be nicely taken care of by taxes collected.
By Lee Wee Tak at 2/01/2012 05:33:00 PM

Email ThisBlogThis!Share to TwitterShare to FacebookShare to Pinterest
Labels: Financial Analysis, Lee Wee Tak, livelihood of yours and mine, Tax