Cabinet, gerrymandering and size does matters

Najib has unveiled his latest cabinet line up. Much will be spoken about whether it can delivera nd transform (into what?), whether under-represented communities would be even more marginalised etc. Those are the hot issues but this blog post would look at the cabinet merely on number of votes, vis-a-vis the pending re-delineation exercise due end of the year. 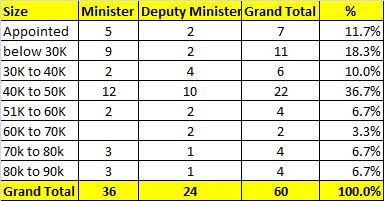 Most developed states are marginalized in the ministerial portfolio allocation even 7 positions were given to senators (hence “non-winnable” candidates not selected to stand for contest in GE) hence by bypassing the scrutiny of rakyat, denying the power of ballot box and an insult to other candidates, both from Pakatan Rakyat and Barisan Nasional themselves. 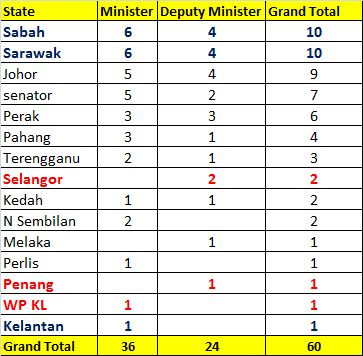 Above: Selangor, Penang and KL voters, despite paying the bulk of federal taxes, are comprehensively denied to have their MPs being elected as ministers and deputy ministers

Top 10 smallest Ministers constituencies merely emphasize the dismal and significantly unfair consequence of gerrymandering. We will have 8 ministers and 2 deputy ministers whose constituencies consist of less than 29,000 voters 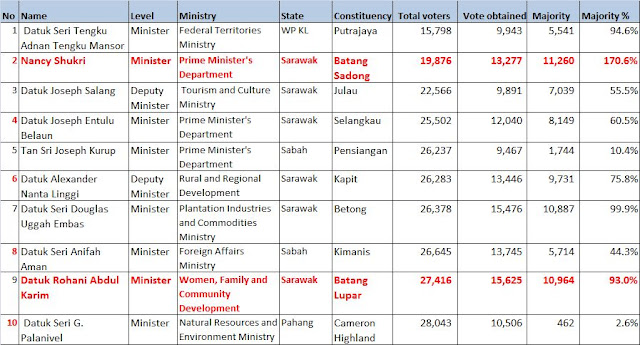 To put the issue in context, the 10 parliament constituencies above are easily dwarfed by state assembly seats won by newbie lady candidates; selected examples as follow:-

The above 3 choices were chose to compare against the candidacy and legitimacy of the Women, Family and Community Development Minister who hails from a constituency size of 27,416, a total which is much lower than the winning majority in Damansara Utara ADUN, let alone votes obtained or size of the DUN constituency.

Prime Minister Department has evolved significantly since the last decade and notably since the Najib administration whereby the size of the ministry and budget it commanded grew rapidly, even exceeding most other agencies. It also boast of 6 ministers hence the ministry with the most ambiguous and obscure terms of reference to the general public have the following 6 ministers; mostly from smallish constituencies and of course Klang Valley is unrepresented.

The sheet size of PM department will see again the usual sigh of Najib playing hero here there and everywhere, announcing projects and allocations that seem to be under the care of other ministries in a bid to consolidate his cult hero image, which degree of success fluctuates. 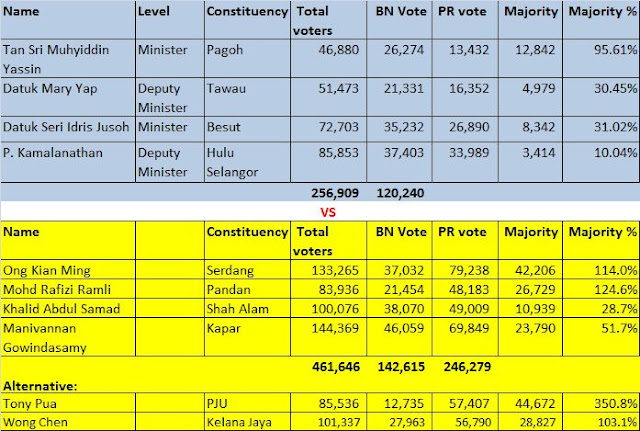 Health
Both sides of the political divides have doctors. In the BN corner, we have 2 doctors that collected 42,355 votes out of 2 constituencies totally 96,866. In the Pakatan corner, we can see there are 3 doctors , and probably others (excluding Dr Ong Kian Ming who is not a medical PhD., in case anyone ask), have all emerged victorious in constituencies with bigger voter numbers and winning votes. In fact in Sungai Siput and Wangsa Maju which BN lost, the number of votes collected by non-medical background Barisan candidates are greater than the votes collected by the medical background Barisan candidates  holding medical portfolio in the government.

The long standing sick joke in the Malaysian gerrymandering saga is Putrajaya constituency. The number of total voters could probably be all housed in 1 address in a tainted electoral roll.
It is sad to noted that out of the 2 ministers in the FT Ministry, 1 is elected in the smallest constituency in the country and the other is not even elected! Noted that BN hold 2 parliament constituency seats in Setiawangsa and Titiwangsa. This is an insult and injustice to Kuala Lumpur votes, tax and rate payers.
And when you look at the Pakatan MPs below, the winning majority of Teresa Kok is more than 3 times the size of constituency Tengku Adnan won. And there are other MPs who have a much more merited claim to presiding over KL and DBKL with hardly any positive feedback from the general public. 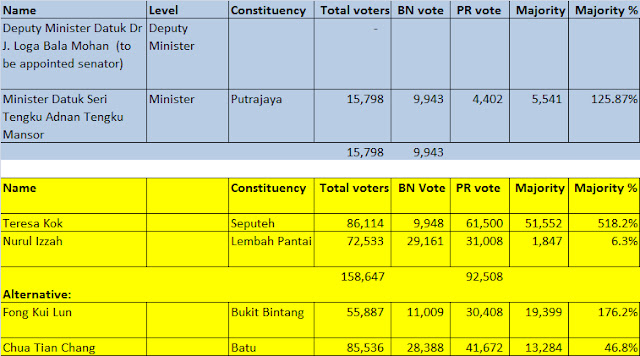 Lastly, it comes to a surprise that the man who the controversial and contradictory statements, Nazri Abdul Aziz.
http://en.wikipedia.org/wiki/Mohamed_Nazri_Abdul_Aziz 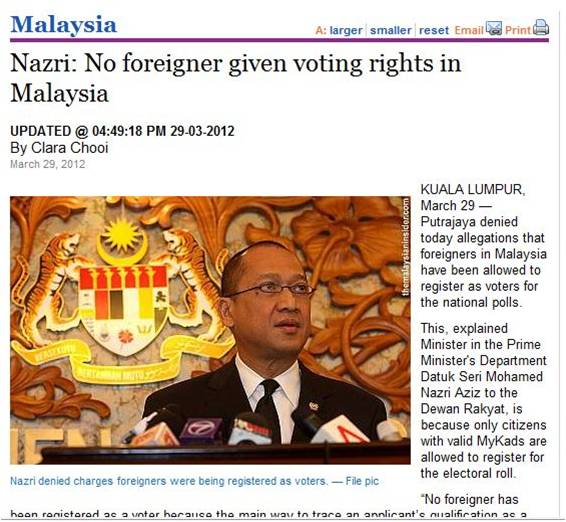 The writer is surprise that his constituencies numbered only 28,572, smaller than many DUN constituencies ( e.g. N23 Manjoi  51,115 voters, N13 Semambu   32,568 voters,  N22 Teratai 40,897 voters).
From such a small space comes one of the loudest mouth and perhaps this would epitomize the consequence of Election Commission’s superbly designed delineation exercise that successful protected a minority government chosen by rural constituencies.
One would argue that election candidates that came through the toughest contested area, where voters are more exposed, well informed, generally well educated and able to express themselves better, deserve to lead the nation into the 21st century and international arena.