Felda: protest march and we are paying for it

Feldas' settlers' are pretty unhappy and decided to march in KL.


The Felda settlers have traded their conventional land base asset to shares which value is voltile in nature, subject to speculation, general world market sentiment and no longer the orthodox "you reap what you sow" kind of economics.

Let's try and understand this for a moment. The dividend as normal folks like us know, is cash. You know, you buy 2,000 Bursa Malaysia shares and if Bursa announce 10sen dividend per share, you will get a cheque dor RM200.

Here, Felda folks get shares. In order for the Felda folks to get cash to get married/buy a meal/renovate their homes/buy some clothes, which means they must  sell their shares in Bursa Malaysia open market.

Therefore, it is very important to BN and Najib's good stance and reputation that the Felda shares are always high. What more when GE is round the corner

However, in other to keep Felda folks happy, the issue of new shares to be given out as dividend has to be maintained. Otherwise the current year track record might look unfavourable to previous year. As a result, more and more Felda shares will be issued and the more dividends are paid by new Felda shares  issued, the greater the dilution of shares values.

So next question, who and how is keeping the Felda share values afloat?

Since Felda Global Ventures Holdings Berhad is a holding company, it is obliged to adhere to Bursa Malaysia disclosure and one of it is announcement of changes in Substantial Shareholders' details, i.e. how many shares are being bought and sold by major shareholders.

You can go to Bursa Malaysia website, look for "Listed Companies" then "Company Announcements" and finally "Changes in Shareholdings". 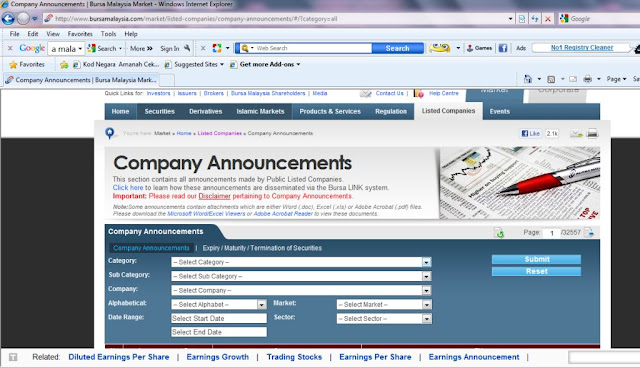 As my livelihood in old age depends on my EPF savings, I take note of some EPF investments.. For instance, from 6th to 11th December, EPF funds were used to purchased 1,014,600 units of shares.

There are numerous purchases by EPF hence EPF must has accumulated a lot of Felda shares...given the frequency of EPF purchases, I have a sickening feeling that my money is being called to pump up and maintain Felda's share price value. If EPF takes a strateic stance, it would probably buy in bulk a few times, sit and review the investment results like a proper institutional investor but from July 2012 till Dec 2012; there are 180 significant buy and sell transactions with the few usual fellows involved. Does this look like  propping up something? 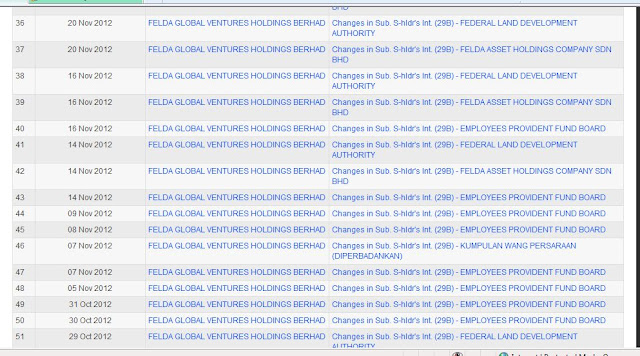 EPF should explain to the public its investment policy and strategy in this Felda counter since it has so many piecemeal transactons..... 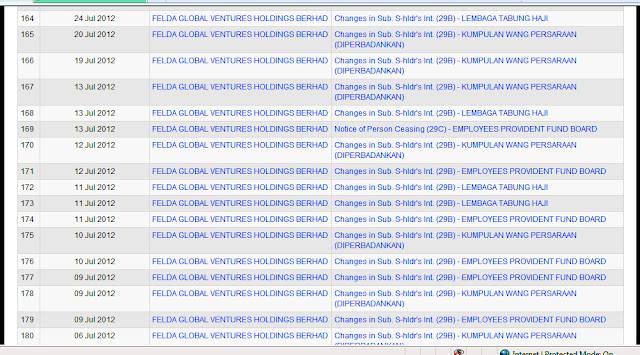 EPF once again has been engaged for "national service"? Frankly the key element is perhaps the shift in and concerntration of  land rights. The UMNO purchase of Selangor land for RM1 per square feet for development purposes illustrates the normal modus operandi - get land first and wealth will follow.

Felda scheme was originally meant to empower people by giving them land that they and their offsprings can continue to work on and survive. Land is a perpetual asset and exchanging it for volatile equity shares will not provide long term stable benefits.

And especially when looking at the Bursa share trading records, it appears that the entire nation's work force's retirement safety net funds is being used to keep a scheme afloat!
By Lee Wee Tak at 12/27/2012 11:04:00 PM