Can a hair dresser bring down a democracy movement?

Recently there is a series of absurd looking but well timed “incidents” of “religious confrontation surfacing in controlled main stream media mainly accessed by the non-muslim community.
I am talking about the hair dresser who got fined by the Kota Bahru Municipal Council and now the non-muslim people being cautioned for indecent behavior by the same authority.

I would like to say, it is an insult to tens of thousands of decent hairdressers and customers who like nothing more than a normal way of making a living and get a routine chore out of the way respectively. Do I get a woody while having my hair cut? Never.
However, the above incident, as abominable as it is, is being blown up with strong scent of 2 elements: expectedly timed prior to a GE and subsequent high profile follow up reports that has vote persuasion happen all over it.

If this was a ruling set some years ago and PAS state government has been running the show for years, why certain individual officers suddenly enforced these long neglected legislative errors only barely 4 months before the BN mandate run its fill course?
Let’s look at it from a non-religious point of view and we can all see that it is a case of little napoleons abusing their powers when writing up and selectively implementing laws that even desert camels would scoff at – whoever that says female professionals cannot do their trained profession on client of opposite gender does not belong to the 21st century. What’s next, hang all male gynecologists and lesbians can only have their hair cut by men?
This charade is no difference from decades of low level abuse of power in Malaysia – temple demolition in Selangor before the last GE, land grab in Selangor now exposed by the Pakatan state government for Selangor,  the numbing “duit kopi” stories involving all sorts of uniform etc…so what’s the big deal about another one who has a big pre-fix on non-sexual issue?
The current administration is giving us bigger problems than non-existing sexual issue in hair saloons all over the country. Heck there is more sex in a police station than all the hair in Malaysia saloons combined.
----------------------------------------------------------------------------------------------------------------
http://www.thejakartapost.com/news/2012/11/14/another-indonesian-raped-malaysia.html
Another Indonesian raped in Malaysia
Ridwan Max Sijabat,
The Jakarta Post, Jakarta
| Wed, November 14 2012, 8:50 AM
An Indonesian maid has allegedly been raped by her employer in Seramban, Negeri Sembilan, Malaysia, Foreign Minister Marty Natalegawa revealed on Tuesday.
The incident took place two days after allegations of a shocking rape of an Indonesian migrant worker in Penang by three Malaysian police officers
(come on council man, do a by-law on police officers cannot interrogate members of an opposite sex and see what happens)

The Constitution makes it clear that religious freedom is guaranteed in Malaysia otherwise Najib and his Menteri Besars would not have run to all over the country to dish out goodies and say nice things during Chinese New Year, Deepavali and Christmas.
Let it be known that the public should not and would not expect all ills are addressed immediately and completely if the current administration is booted out by legal and democratic means. It would probably be a mixed bag of old problems solved and new problem arises. At the moment, I prefer solving the old one first and worry about the new one when and IF there is any.
I got bigger problems to worry as I am being screwed financially, socially and mentally by the rising cost of living due to corruption and abuse of power (AES is a faceless summons issuing machine compared to an erratic lil’ napoleon screwing up a town council), the raising crime wave, the poisoning and radioactiving of our country, destruction of our judiciary, murderers getting away with it (Altantuya, Kugan and Teoh Beng Hock as well as countless others who deserve justice).
Get ride of the big issues first. Tax paying public is whom elected administration should serve. If really there are zealots who issue such stupid summons around base on nonsensical by laws, do you think the Malaysian public would stand for it and be slaughtered?
If I put on my political commentator hat, which I am not professionally qualified to wear it, PAS missed out a chance to score more brownie points with the non-muslim community by giving prompt and conclusive solution to the problem; giving MCA cartons of ammunition to spew. I think this is perhaps there is an element of political consideration on PAS's side given that the Malaysian public has been educated, moulded, trained and misled to look at certained issues from religious point of view and not logical point of view....or just plain inertia on PAS's side.
Plain and simple,  Buddhist practice is not applicable to Muslims and vice versa. Would Malay voters love PAS more if PAS forces non-Muslims to follow Islami rule? I doubt it.

On the other hand, while MCA goes all out to triumphed this golden nugget and conveniently skipped the topics that made Chinese angry enough to walk the streets such as SRJK(C), the problems Chinese Independent schools faces etc, 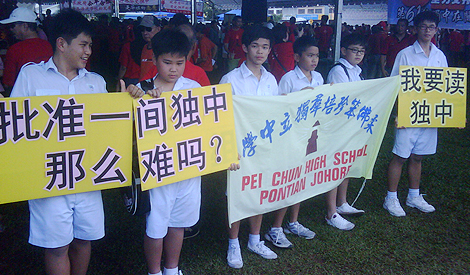 Caption: Is it so hard to approve the application of a private Chinese high school?

UMNO does not seem to speak for the poor Chinese "oppressed by PAS", albeit the top man there sells his 1Malaysia and BN is fair to all races stance oh so well. Imagine UMNO prctice BN 1Malaysia to tell PAS to lay off Malaysian Chinese. That would look good in the just concluded AGM, right or no? Conclusion: it is just a show to save your buddy’s arse, following a mauling from disputing and losing an argument about debt recovery enormously embarrassingly.
Malaysian public is much more than what Hudud- Armageddon –Mongers give them credit for.
Malaysians have taken to the streets and getting hurt for Anti-ISA, Bersih, Anti-Lynas etc. Do you think good, rational Malaysians will stop and lay down their principles, will power and moral courage once there is a change in the government? 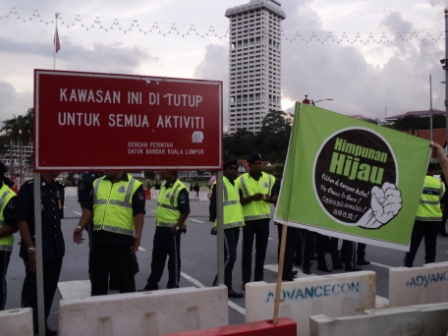 No, new movement for people’s right will continue and thrive. There is no way back to the bad (or good for some) old days where Malaysian tax payers are dumb, scared, oblivious, cowardly, ill-informed and scattered
And beyond the current administration, I believe there shall be one that allow peace, rational means and civilized approach to prevail. For a small by laws thingy, we need not take to the streets but the battles shall be found in offices of town councils and various courts in Malaysia. And I would love to see how some nugget from a town council can prove that female hair dressers can invariably lead male customers into paid sex.

Otherwise, the new government can resume local council electionssuspended due to the now defunct communist insurgency so that we people, and not politicians will deal with them.