In the run up to an anticipated snap GE, the prime minister dangled previously unimagined sweet promises.

Najib: We value an independent judiciary
By V. Anbalagan and Sean Augustin
news@nst.com.my
2011/09/08

PUTRAJAYA: The prime minister said that his administration respects and understands the need for an independent judiciary.

"My administration is committed to an independent judiciary, which is an essential ingredient in nation-building," Datuk Seri Najib Razak said in his speech during his maiden visit to the Palace of Justice (POJ), here yesterday, which houses the Federal Court and Court of Appeal.

Well, he got a very easy thing to do to prove how serious he is with regards to those lofty goals and put away the ghost of Perkasa torpedoing his previous flagship called NEM (not to mention a tragic waste of tax payers' money succumbing to subcontractor of some sorts to a political party)

Take a look at this section of Election Act, 1958. 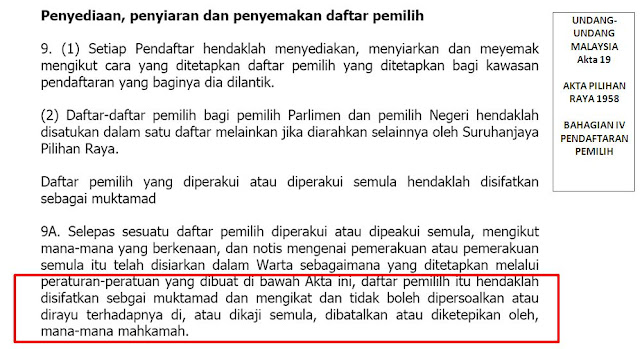 Whoever drafted this piece of injustice is basically telling the judiciary to f@#k off if a concerned tax payer notice something amiss with the electoral roll.

This is a piece of legislation by the best democracy in the world, basically saying that basic democractic right of seeking justice from courts is denied.

This is a piece of legislation by the administration that respect the judiciary, basically saying that a set of bureacrates who are proven incompetent (by, from numeorus examples, registering lesbian army couple as postal voters)  is a force above the judiciary.

Holy goreng pisang, if a matter as serious as Perak power grab can be brought to several round of court hearing, then how come a set of electoral roll ladden well proven to be full of issues, is not subject to judicial review?

Isn't seeking redress from courts a foundation for democracy?

Then how come the legislation is telling the judiciary not to look at the proven incompetent executive over matters of public interest?

Najib can just propose the sentence in the red box to be removed. I am sure all the BN MPs would praise him migthily and vote for it.

(By the way, notice the silence from Perkasa when Najib announce that the Bumi quota will go eventually? Did the bullet holders mailed all their stocks to Tony Pua?)


Secondly, after declaring the electoral roll is a no-judiciary-area, we have this curious piece of legislation below

The EC may produce another set of electoral roll (may be different from the gazetted one where the public can review and protest within 7 days only - read my previous post) on nomination day and that roll is final and not disputable.

Say on 4th October they produced the latest supplementary electoral roll for public scrutiny. By 11th all protests must come in. Let say on the same day, the PM decided to call for election and set the nomination day on 18th October.  When I read the election act below, it seems that there is nothing to stop the EC from amending the electoral roll that was closed to public protest on the 11th.

Wonderful things can happy within an unscrutinized window period, use your imagination with liberal doses then.


Najib can also ask to streamline the 2 pieces of legislation and ensure only 1 set of electoral roll is accepted. Otherwise, one cannot refrain from wondering what can go on right until the day of nomination.
By Lee Wee Tak at 9/28/2011 10:40:00 PM