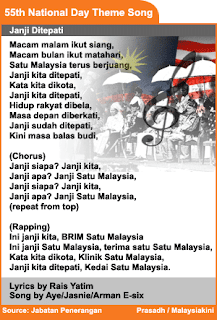 With the issuance of the standard “avoid misunderstanding” excuse, the much maligned Janji Ditepati slogan is removed from Merdeka Day but perhaps reserved for BN Day celebration later.

http://www.malaysiakini.com/news/204898
Gov't scraps controversial Merdeka logo
9:18AM Jul 29, 2012
The government has decided to replace the 55th National Day celebrations logo with the standard 1Malaysia logo after a week of public outcry.
Announcing this in a post on micro-blogging site Twitter, Information, Communications and Culture Rais Yatim said this is to "quell misunderstanding".
"To quell some misunderstanding, we (will) only have 1Malaysia as (the) logo for Merdeka (and) Hari Malaysia," he said 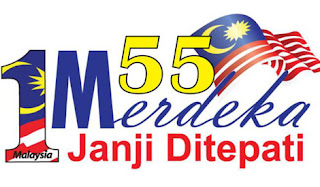 The lyrics of the songs celebrates Bantuan Rakyat 1Malaysia,  the way this country is runned until welfare payout is celebrated, is most unusual by world standards.
The back pedaling however, do not excuse tax payers and public at large for examining the current administration’s intention and performance , as it claims that it fulfills promises.
Read more »
By Lee Wee Tak at 7/29/2012 01:04:00 PM 3 comments: Links to this post

Email ThisBlogThis!Share to TwitterShare to FacebookShare to Pinterest
Labels: Economy, Lee Wee Tak, livelihood of yours and mine, speaking up

Musings about the private retirement fund

Email ThisBlogThis!Share to TwitterShare to FacebookShare to Pinterest
Labels: elections, Lee Wee Tak, livelihood of yours and mine

I am very surprised by this latest beating of my tax money.


KUALA LUMPUR: A special RM100mil fund will set up to spearhead the 1Malaysia For Youth (IM4U) programme, in a bid to instill a greater spirit of volunteerism amongst the nation's youth, Prime Minister Datuk Seri Najib Tun Razak announced Sunday.

He said the fund, named Dana Sukarelawan 1Malaysia (DRe1M), will be managed by a special task force with administration and distribution of allocation done online.

...................
He also said he would personally head an IM4U board of trustees to oversee the smooth running of the youth volunteer programmes.

He also announced that 2013 will be declared the Year of Volunteerism to further instill the spirit of volunteerism amongst youth.

Don’t learn NOT to pay your debts

Email ThisBlogThis!Share to TwitterShare to FacebookShare to Pinterest
Labels: Economy, Lee Wee Tak, livelihood of yours and mine, Penang, Selangor State Government

IHH Healthcare Berhad listing: For it means for the man and woman in the street

PM Ah Jib Khor continues to mesmerize the public, with imminent and oh-so-secretive timing of GE, with another of his Economic Transformation Plan gizmo – listing of IHH Healthcare Berhad. 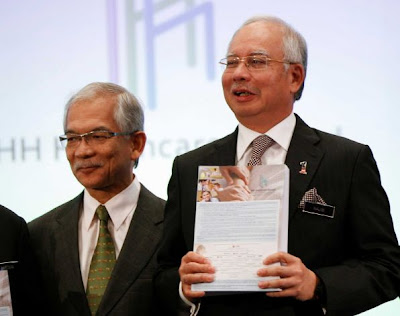 KUALA LUMPUR: The listing of IHH Healthcare Bhd (IHH) further affirmed the development and the maturing of Malaysia’s private healthcare sector and its emergence as a key player on the international stage, Prime Minister Najib Tun Razak said.
……………..
“I can safely say that this also offers further evidence of the vibrancy and depth of our capital markets, once again underlining the fact that Malaysia is a bright spot on the otherwise dark canvas of global finance,” he said at the launch of IHH’s initial public offering (IPO) prospectus here today.
He said the listing of IHH was an example of Khazanah Nasional Bhd’s commitment to delivering a clear and coherent regionalisation strategy, bringing together best-in-class business through a combination of mergers, acquisitions and collaborations.
………………………
“With this listing, IHH can further cement its role as a leading force in the global healthcare sector,” he said.
Xxxxxxxxxxxxxxxxxxxxxxxxxxxxxxxxxxxxxxxxxxxxxxxxxxxxxxxxxxxxxxxxxxxxx
Wah, very nice big words Ah Jib Kor. But what do you mean-ah?
Read more »
By Lee Wee Tak at 7/04/2012 11:48:00 PM 2 comments: Links to this post

Email ThisBlogThis!Share to TwitterShare to FacebookShare to Pinterest
Labels: Health care, Lee Wee Tak, livelihood of yours and mine, tak nak 1Care Malaysia

What is so great about vote buying?

We probably should have anticipated what was more to come after the the legendary and trade mark setting sentence of "you help me, I help you" vote buying rallying call in Sibu.

Since then it is disbursement here, there any everywhere.

The government had disbursed RM608.68 million over 11 weeks to the people through Prime Minister Najib Abdul Razak's and his deputy Muhyiddin Yassin's official nationwide visits.
According to a parliamentary written reply, the "urgent allocation" approved from January to March 15 was handed out during their 14-state visit, with Perak recording the highest at RM220.38 million for 34 projects.

Jerai PAS MP Mohd Firdaus Jaafar on Tuesday had asked the Prime Minister's Department to list to all the allocations approved for the prime minister's official tour of the states.

Allocations for Johor ranked second, with RM201.40 million doled out for 24 projects, while the Federal Territories came in third with RM63.25 million dispensed for nine projects.

Najib’s recent marathon forays to Perak and Selangor focussed on opposition-held areas, distributing goodies and promises to boost BN’s popularity, had fuelled speculation that polls might be announced soon.

While RM606.68 million seems huge, it represent a minor investment to secure BN's continue power hold and loose change to wealth generation and preservation of those who waltz in the corridor of power and its lucky associates. The added bonus is that your lenders, being the tax payers, have no recourse against your personal assets, unlike a normal businessman or housebuyer begging support from a tightly regulated financial instituion.